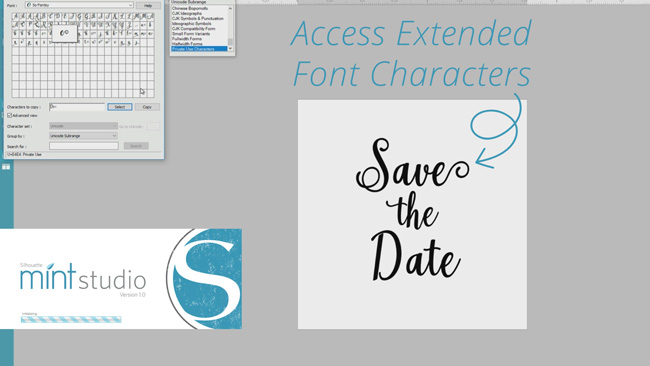 Over the past few years, SO MANY beautiful fonts have been released, and many of them included extended characters. These can include multiple variations of characters – for example, two different lowercase “a’s” and/or two different uppercase “S’s” – as well as character variations with beautiful flourished endings and special glyphs for non-English alphabets. Extended characters can also include ligatures, which are two or more letters that are designed as a single glyph for better visual appeal. Each of these types of extended characters adds visual appeal and a more hand lettered, custom look to your finished design. So, of course we want to be able to access these options when we’re making our Silhouette Mint stamps, right?

In the video below, I’ll take you through the process of accessing extended font characters in Silhouette Mint Studio on a Windows PC using the Character Map. If you’re on a Mac, you can use an app called Font Book to accomplish the same thing. The font that I use in the video is called So Fontsy, and as of the date of this post, you can download it for FREE exclusively over on the SoFontsy site.

If you go through the step-by-step process shown in the video and see a bunch of blank areas where the extended characters should be, then you may very well be dealing with a non-PUA encoded font. PUA stands for “private use areas” and PUA encoded fonts allow you to access any special or extended characters included in a font in programs such as Silhouette Studio, Cricut Design Space, and Mint Studio. If you’re using a font that is not PUA encoded, you won’t be able to access these characters and the character map will be blank like this one is. So, if you’re going to use a font in Silhouette Studio, Cricut Design Space, Mint Studio, or similar programs, be sure to make sure that it’s PUA encoded before you purchase it. On sites like SoFontsy this information will often be included in the font description, but on sites like Creative Market that don’t cater specifically to crafters, it may not be, and you’ll need to contact the seller to double-check.

Check out the video to learn how to access extended font characters in Silhouette Mint Studio:

Supplies Used in This Project

The following supply list contains affiliate links. I make a small commission if you purchase through these links, and I really appreciate it if you do!

This site uses Akismet to reduce spam. Learn how your comment data is processed.

I include affiliate links throughout the site and will receive a small commission from purchases made through these links.

My opinions and preferences are my own, and I will never recommend a product that I wouldn’t use myself. 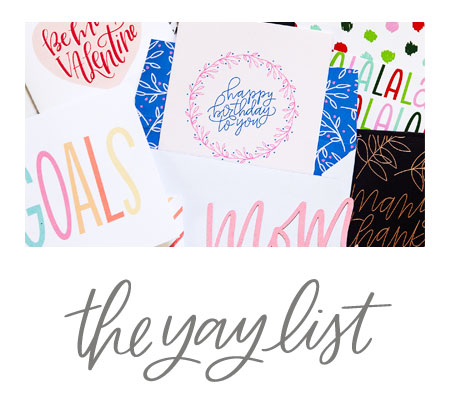 Join The Yay List for new product news, updates, and EXCLUSIVE, limited edition monthly freebies. Basically, you'll be the first to know what's happenin' around here. Yay to that!

You have successfully subscribed to The Yay List. Thank you!

We hate SPAM and promise to keep your email safe.